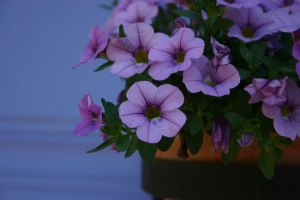 Bacopa. This summer’s favorite for pots. This one is spilling over it’s pot on the wall on the back deck.

Another weekend spent in the yard!

We stole away early on Saturday to avoid all the drunk clowns on little motorcycles. Pinedorado again. This is the first one since we’ve lived here that we haven’t gone to. I couldn’t bear the thought of it this year for some reason so we opted for a trip to the Evil Home Depot.

Things we (mostly Scottie) did this weekend:

The Gingko garden is now done. I was planning on planting chamomile between the pavers but since I couldn’t find any, I opted for some wooly thyme which has lovely little purple flowers. I finished planting the nasturtiums seeds, threw down some mulch and have been sitting the rest of this afternoon watching Scottie go go go. He’s building the dogs and the garbage cans a little house! He also finished the deck in front of my studio, dug up and cut up the dead fig tree and finished the fence around the Gingko garden. The man is unstoppable.

The fig tree, we discovered was eaten away at the roots by those cabrones, the gophers. Just as well, it was too close to the studio. Now that area will have to be rethought. A bocce court? Should I just keep paving it? I’m too tired to even think about that today. It’s been unbearably hot this weekend.

More nasturtium seeds in the driveway. I also have some calendula seeds that are almost ready that I will also broadcast in the driveway. Easy, low water and reseeds itself like crazy.
If and when I find some cerinthe, I’ll plant some in the driveway as well.

Also planted four little english lavenders around the plum tree and so far Cassius has been behaving. Going up the hill to do his dirty work.

Planted another 40 daffodil bulbs in the driveway and more in the central garden.

I think I’m ready for my vodka mojito and then a nap.