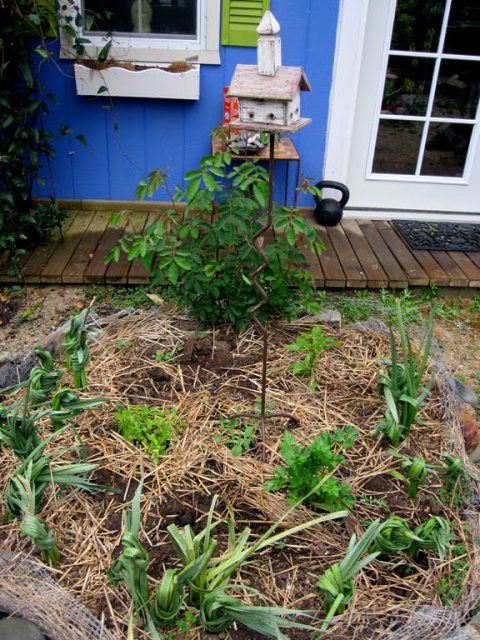 I finally gave in and bought plants this weekend.  Not just my vegies but flowers for the window boxes and sweet peas which I have not been successful at growing from seed for some years now. Don’t know if it’s where I’ve been planting or if it’s some other issue like maybe I forget to water them.  This year will tell.
The bed above has a volunteer rose.  Not a bud on it yet but I’ll give it some time. Meanwhile I planted lemon basil, parsley, and a fresno pepper along with a sweet pea in the center to grow up to the church house.

I planted the tomato in this bed by the fence which doesn’t get as much sun as last year’s tomato bed. I bought a Siberian tomato which does best in cooler climates and maybe I can manage it better than I did last year when the tomato turned into a tree. Also in this bed, several varieties of lettuce and some cilantro and a cauliflower!

The Lair Bed
was attended to this weekend by the ever popular Tearful.  Not only can he make the best pizza in the world but he’s monster strong as well as heavily armed. Do Not Mess with him.
He pulled out a giant fort night lily bush that I thought we’d need a crane to get rid of.  A beautiful plant but one that got “away” from me like so many have and then they get threatening and scary and I have to call in the big guns.  He also removed the bamboo from this bed and it now lives in the oak barrel (previous picture)along with some volunteer Jupiter’s Beard and Allysum.  We have some lovely weeds.
It’s raining today and probably tomorrow which gives my back some much needed rest. I’ve been very very good about not overdoing but I am easily drawn in to do just one more thing which turns into three more and so on until the entire day has gone by. My favorite way to spend a day!