Not exactly a fever, more like a simmering. Idea after idea after idea. These insanely beautiful days infuse me with a kind of euphoria. It’s the garden. I’m in the studio and looking out those doors at that wild spectacle of flowers and next thing I know, I’m digging, shoveling, planting, moving things from one place to another, making plans and then just sitting. 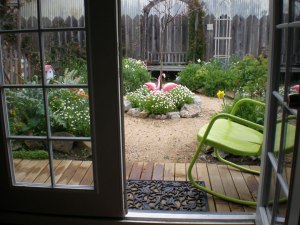 After a while I take a closer look at those bachelor buttons that have been blooming since I planted them how many months ago? At least 6. They have never stopped! Those little periwinkle blue heads swaying in the wind while that tenacious little white daisy snuggles around their stems. The poppies are up and spreading, soon they’ll be big and bushy spreading out onto the paths.

That whole central garden has looked grand all year long even with the gopher action. It’s a wild space even though it’s somewhat contained. I’ve tried several ways of planting it. It started out with one rose in the center of each of the four beds with smaller plantings around them like erigeron, allyssum, daisies, snapdragons, cerinthe, bulbs like daffodils, harliquins and tulips though the latter never bothered to make an appearance. Not cold enough? Too many other beauties to compete with? Tasty gopher treat? Who knows though I think that’s my last attempt at tulips. I had tomatoes and eggplants and even broccoli rabe in those beds too. All that planting has morphed into it’s own thing. The strong survive and come back again and again and there’s always the calendula and jupiters beard that spread through our gardens like they own the joint. They only need a little trimming back every now and then to keep from getting too exuberant. Everything seems happy together. They’re all nuzzled up against each other. It’s not a neatly manicured place. It’s more like an unmade bed with gorgeous sheets you don’t necessarily want to hide under a bedspread. I admire my neighbors garden with such neatly planted flowers laying in tidy little mounds of mulch. It’s orderly in a way I can’t seem to maintain and gladly so. 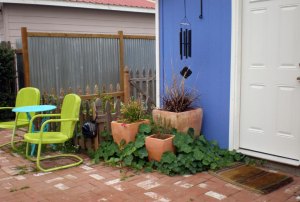 Like these nasturtiums. I will have to pull them out soon. Before they creep in through the door but for now they’re a beautiful cushion around these pots.

And this poppy. I hate to see it go I think it’s the first bloom in the yard but I’m fixing to fire up a raku pot in that stove pretty soon. 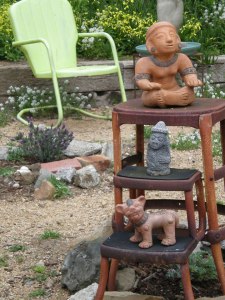 Underneath this stool is an artemisia. I tried a lavender but Cassius decided he didn’t like it and used it as his favorite pee spot. I’ve enlisted three of my familiars to convince him otherwise.

My propagation shelf. I’ve got abutilon, hydrangea, mexican sage, princess flower and a couple of other sages all rooting here. Some doing better than others.