The days are running together so fast I have to stop and really focus to remember what day it is and where we were yesterday or two days ago.

This morning we are at the Great Sand Dunes National Park right at the foot of the Rocky Mountains, just off the Cosmic Highway. Though the Monk has given it his best shot, the aliens have not seen fit to take him at this time.

Last night we hiked down to the creek at the base of the Dunes to watch as the sunset painted the sky and dunes all shades of pinks and blues and grays. It was glorious. Being elderly, tired and ill prepared, we didn’t venture up and into the Dunes but there were plenty of people heading up and disappearing into the dark. We didn’t see anyone come out. The Monk thought maybe there was a giant toad on the other side of the Dunes flicking them up into his mouth with his sticky tongue.

Yesterday we drove up to Crestone a small town right at the foot of the Mountains.  One road into the town and out. I felt like I was in a Twilight Zone episode with a really good restaurant called Bliss. There were some interesting  looking characters wandering around.  One reason I wanted to go there was because of the amazing patchwork like rocks I’d seen at Tizia and Paul’s labyrinth in Taos. They’re known as conglomerates and I found one right on the street in town. I also discovered there are about 30 spiritual retreat centers in and around the town. You can come and get so spiritually creamy you probably wouldn’t even notice winter settling in or you would and you would love it. I am pretty sure I would not.

Joyce, a friend of the Monk’s has now joined the party and it’s been great fun being with her.  She has a place in Denver and that’s where we are heading today. I’ll stay a few days there with them and then start my journey home. I am missing those babies and Mr Weepy. 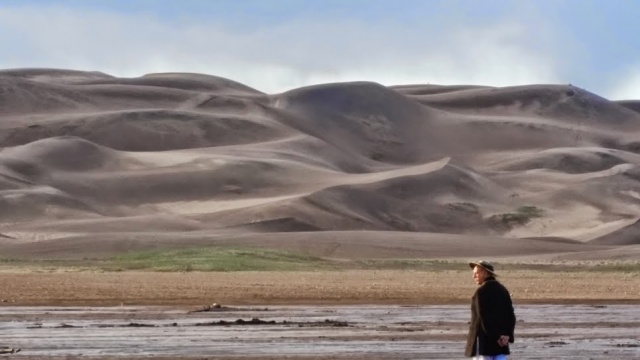